Went missing on the 21st June 2017 in terraced block between Lewington Rd and Maywood Rd, up top by gated lane. Had a spotting on the 22nd, but nothing for the next 4 days. Until this morning (27th) she was spotted by the same people in their garden again. Later on we did a search and she was under some decking, too scared to come out. Eventually she did and ran off to the lane then back into another garden, cornered behind their shed. Coaxed her out and now she’s home, stuffing her face and getting pets. 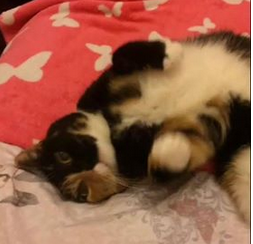 Thanks For Reading:
Reunited 5 Year Old, Tortoiseshell Cat in Fishponds